Ambulance takes 40 minutes to get to Olympus football ground!

There was yet another delay in an ambulance arriving on Saturday evening when it was called out to Olympus football ground after the end of the match. One of the players in the Olympus-Asteras Petritis match didn't feel well after the game and collapsed and it took the ambulance 40 minutes to get there. The match doctor Spyros Dafnis had just left but was immediately called back to give first aid - but for the umpteenth time, with the life of a 25-year-old in danger, the ambulance delayed in coming.

When it did arrive, the team president and the vice-president of Corfu Football Association accompanied the patient to the hospital and the incident was a matter of concern for all those at the ground.

"Yet again, all three ambulances were occupied - one in the north, one in the south and one in town," EKAB Union President Christos Kypriotis told Enimerosi. "The call went to the EKAB centre, which, as we know, is located in Ioannina and we weren't able to get a clear picture of what information was given.

"When we got there we saw that the match doctor was present and, fortunately, the man's life wasn't in danger. There was, indeed, a delay in getting there as there wasn't an ambulance available - as we have been shouting for so many years. The island needs more ambulances and paramedics immediately."

This incident took place on the same day that the EKAB swift response motorcycle arrived and two days ahead of it going into operation. 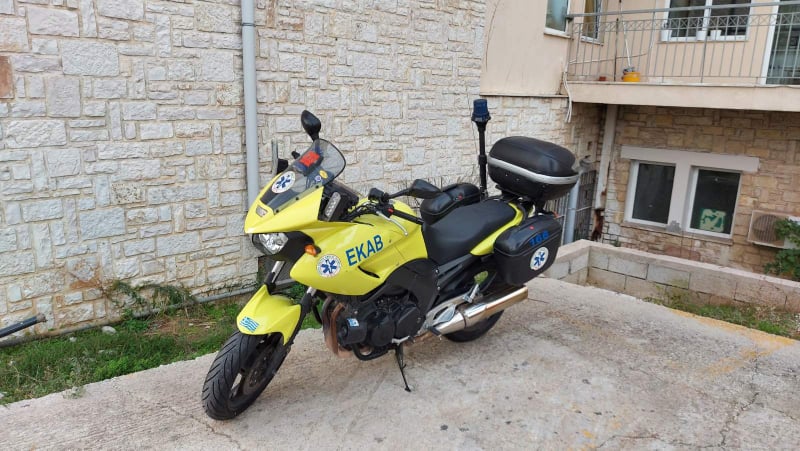 The Union points out that this has come about following the continuous efforts of the workers. From Monday 8 November, the motorcycle will be in operation to respond swiftly to life-threatening incidents.

"We would like to thank all those who helped bring this about and we promise to keep up our efforts to improve and upgrade the services offered," said the Union.