The popular tourist destinations of Corfu, Rhodes, Kos, Zakynthos and Crete along with Portugal and the Canary Islands are still considered safe by the British Foreign Office.

The Daily Telegraph wrote last week that the Foreign Office had updated its advice and was not advising against travel to Portugal (with the exception of the Azores), Malta and the Greek islands of Rhodes, Kos, Zakynthos, Corfu and Crete. It also considered the Canary Islands and Israel safe. 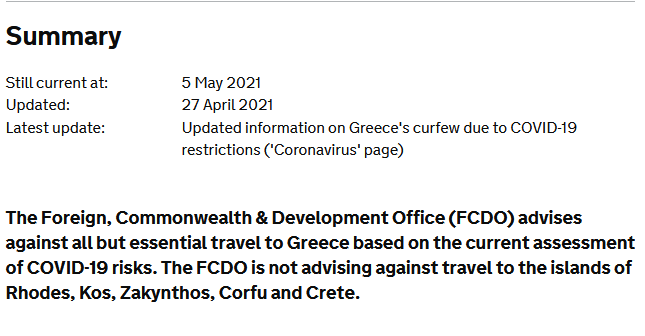 The travel advice against travel to mainland Greece and Spain still stands. The British Government is ready to lift the ban on travel to several countries on 17 May and is expected to announce its 'green list' of countries on Friday  where British citizens will not need to go into quarantine when returning.

Countries will be included in the list based on high vaccination rates and low levels of Covid-19 cases. It is expected that the list will have fewer than 10 countries.


With information from Telegraph.co.uk