Christmas concert at the Duomo

CORFU. Co-organised by the Anemomylos ‘Thomas Flagginis’ Cultural Society and the Ionian Islands Region and dedicated to the Catholic Archbishop.

The Anemomylos ‘Thomas Flagginis’ Cultural Society Choir, along with the Ionian Islands Region, is organising a concert dedicated to the Catholic Archbishop Father Georgios Altouvas on Wednesday 15 December at 8pm at the Catholic Metropolitan Church – the Duomo.

The concert will be under the musical direction of Andreas Gousis, while the Soprano Anastasia Fissa will be the soloist, and it will include the work ‘Christmas Oratorio’ by Camile Saint-Saëns. 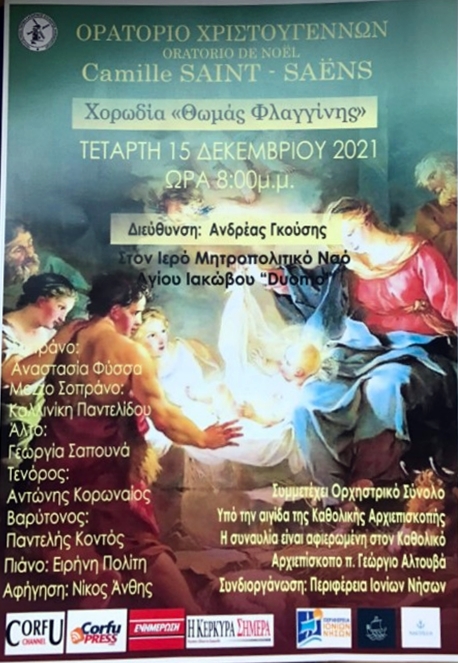 Mezzo soprano Kalliniki Pantelidou, alto Georgia Sapouna, tenor Antonis Koroneos and baritone Pantelis Kontos will also take part in the concert, accompanied on the piano by Irene Politis ,while Nikos Anthis will do the narration.

At a press conference held today to announce the concert, it was said that an orchestral ensemble of Ionian University students will also participate, while the event will be under the auspices of the Catholic Archdiocese. “The Anemomylos Cultural Society is dedicating this concert to the new Catholic Archbishop Father Georgios Altouvas for being an Archbishop in Corfu for a year now,” said Pantelis Kontos.

He also thanked the Corfu Deputy Regional Governor Kostas Zorbas for supporting the cultural activities taking place on the island, as well as the Central Corfu Deputy Mayor for Culture Chrysoula Tombrou.

Kostas Zorbas stressed that the Ionian Islands Region will be by the Cultural Societies’ side and will actively support their efforts. “The pioneer of all this is the Ionian Islands Regional Governor Rodi Kratsa, who is sensitive towards cultural issues, especially when it comes to the Ionian Islands. Corfu, with the Philharmonic Bands and the Choirs, produces culture and it is our obligation to support such efforts – especially since people like Pantelis Kontos have given everything in order to create these Choirs and Societies,” said Mr. Zorbas.