CORFU. Update from the Central Corfu Municipal Covid Watch Committee regarding the spread of the virus in Corfu since the outbreak of the pandemic.

The Central Corfu Municipal Covid Watch Committee is continuing to monitor developments in the pandemic on a local level in real time. Today's report is an update on the initial report which was published on 15 September.

Based on the data it has collected the committee has recorded 45 confirmed cases of COVID-19 amongst Corfu permanent residents and 67 amongst visitors from the beginning of the pandemic until 30 September.

Confirmed cases are considered to be those which had PCR tests which were analysed at SARS-CoV-2 labs which regularly report all the tested samples to EODY. Of the 45 confirmed cases of Corfu permanent residents, 13 (28.9%) were hospitalised. The number of deaths of permanent residents remains at 2 as there haven't been any recent deaths from COVID-19. On 1 October there was a death of a visitor who had been hospitalised in Corfu.

In September the Committee recorded a total of 10 confirmed new domestic cases and 15 new cases amongst visitors - confirming the assessment in the previous report (14/9) that the spread of the SARS-COV-2 virus in Corfu remains relatively limited but is still spreading.

The daily figures for new cases amongst permanent residents based on when the test results were received are shown in Table 1. 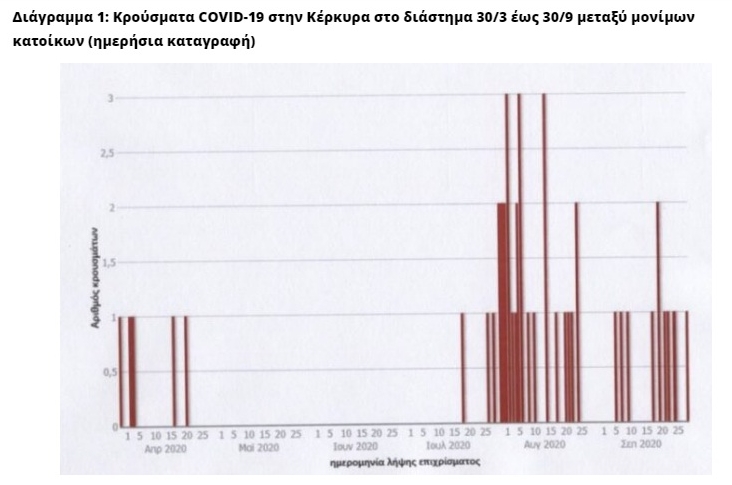 The table shows a steady rate of infection after the reappearance of cases amongst permanent residents from 18 July. The largest concentration of cases can be seen in the first two weeks of August, after which the rate decreases. The monthly figures can be see in Table 2. 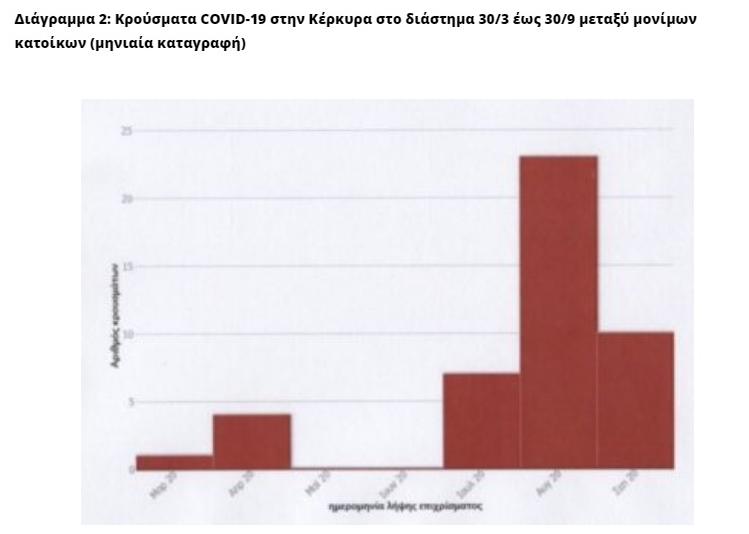 As regards the geographical breakdown of domestic cases, there continues to be a large concentration in the Central Corfu Municipality, especially Corfu Town - all the confirmed cases recorded in September apart from 1 were Central Corfu residents. 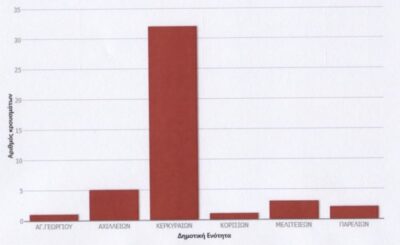 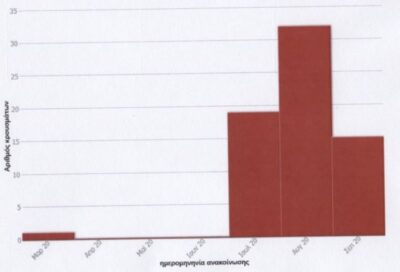 The figures show that the spread of the SARS-COV-2 virus in Corfu remains relatively limited. The ratio of confirmed cases is 0.5 per 1,000 population compared to approximately 1.8 / 1,000 nationwide. The breakdown according to gender and age is not too different from that of the country as a whole. The real number of cases is much greater than that but can be estimated with relative certainty as being less than 1% of the population in Corfu

The data shows that Corfu didn't have the same spike in cases as Attica and some other areas in September. Nevertheless, the data shows that the virus has spread through the population in Corfu and there may be a spike at any time. It is difficult to predict when there could be a spike and for how long and is important to strictly adhere to the measures and continuously monitor the pandemic on a local level in order to identify possible clusters immediately and control them.

The Covid Watch Committee will continue to monitor the pandemic on a local level in real time so that infections can be identified immediately and local authorities can take action to control them. It will also continue developing as clear a picture as possible of the spread of the virus amongst the Corfu population. 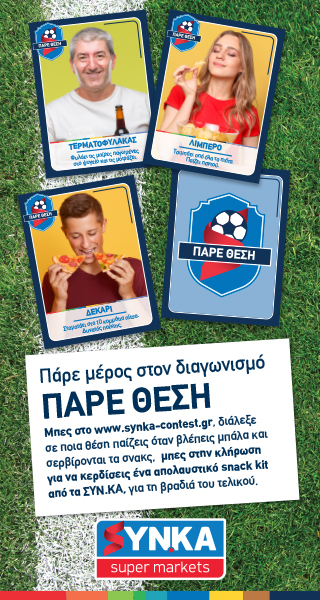 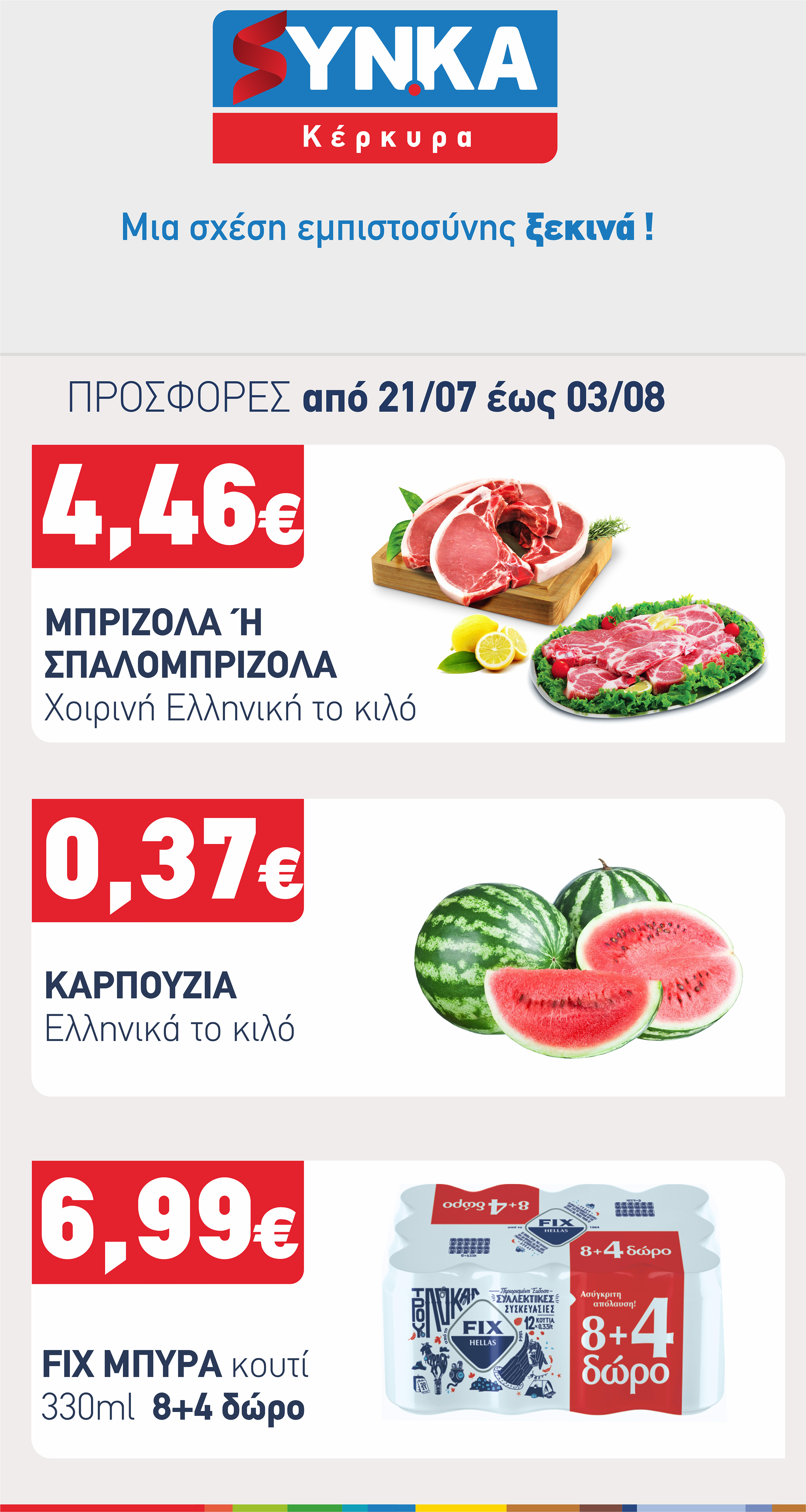 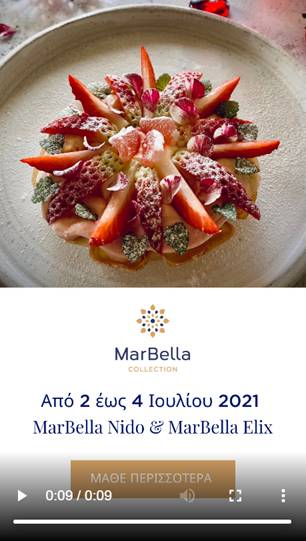