CORFU. The airport stood up well to this year΄s pressures and is optimistic about next year - Capacity problems - Runway reconstruction to be carried out.

It seems that Corfu Airport is too small! This conclusion could be drawn from Fraport Greece's recent briefing and review meeting in Corfu five years after the company took over the management of the airport.

Not only the terminal, despite its extension, but all areas of the airport are at full capacity. This was the concern expressed by nearly all the local representatives and stakeholders present at the meeting, who use the airport on a daily basis with transfer coaches, rental cars etc.

The representative from Enimerosi brought up the earlier Civil Aviation Authority master plan involving the moving of the air traffic control tower and the fire service to the Public Services Air Support Unit car park to allow the extension of the terminal northwards towards Eth.Lefkimmis Rd.

This was also to allow the construction of a second runway for the provision of supplies to the aircraft instead of having to use the main runway, especially in peak periods. Fraport Greece CEO Alexander Zinel and Corfu manager Spyros Kostouros confirmed that there had been such a plan - from the Civil Aviation Authority - but which was abandoned due to developments.

They talked of modern management methods in the internal and external areas in order to gain space and it seems that are hoping to expropriate the area to the north of the runway in order to create a buffer zone.

Another way to gain space is to increase the parking area. This may be seen as a threat by the professionals, who have enjoyed the same parking prices over the last two years due to the pandemic - but there is concern following the increase in prices at the Fraport airport in Rhodes. When asked about this, the company representatives confirmed that there will soon be new prices at Corfu Airport as well.

The new upgrade projects were announced involving the total reconstruction of the runway that will take place in two phases over two years, with the airport closing for at least two weeks during each phase. 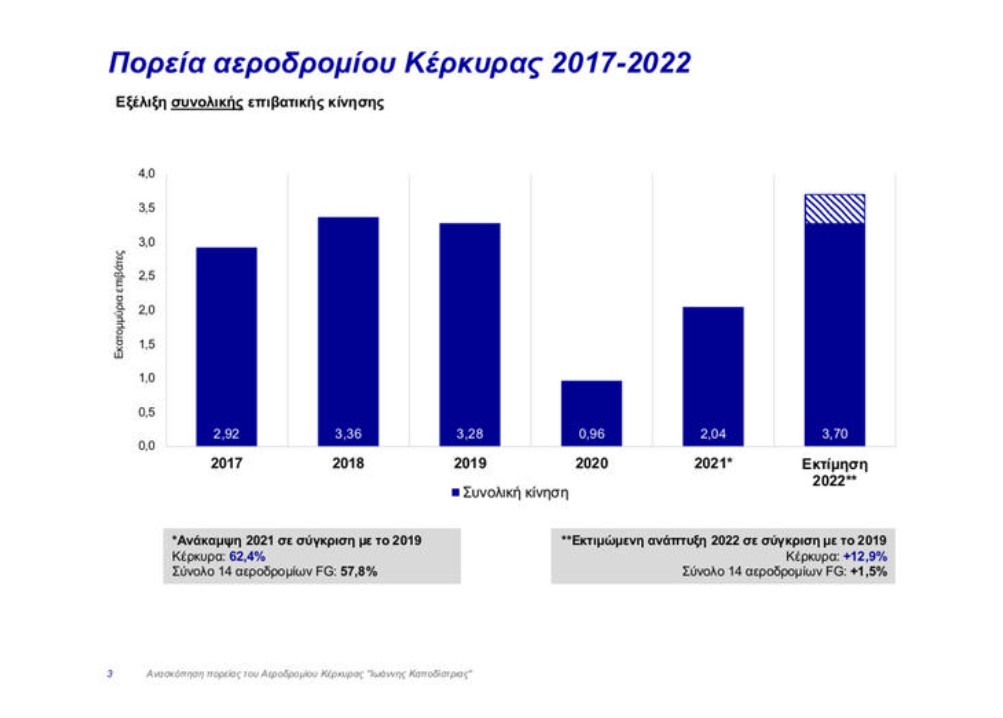 The results this year were impressive, following the pandemic period - and this is expected to continue. Officials have every reason to be proud of the fact that at Corfu Airport - and other Fraport airports - there were no real problems with delays and baggage handling as there were at other European airports due to personnel shortages.

With regard to the question of whether the airport could handle an extension of the season beyond the summer, Fraport officials said that for that to happen there need to be passengers - but, in any case, the airport will be able to handle it.

In conclusion, it was stated that Corfu Airport had another record year with around 1.7m passengers.