And there was AUKUS 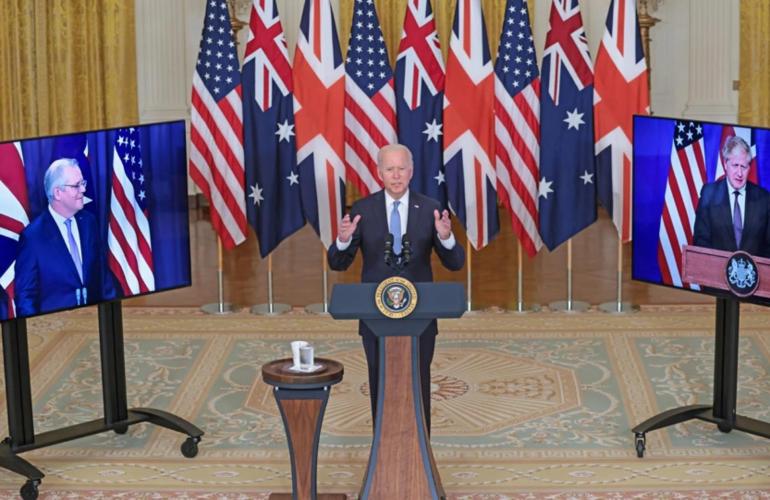 Australia is America's canary. Canaries were being used in the coal mines, so that their death, from the inhalation of carbon monoxide, would give early warning to miners. Here, the mine is the South China Sea; and the carbon monoxide is China itself. Miners are the Americans.

Only those, who have not been watching what is happening in the South China Sea in recent years, have been surprised by the announcement of the AUKUS (US, UK, Australia) civil-military agreement the day before yesterday. Almost the whole of this sea is claimed by China (as its "blue national soil", which of course includes the ​​East China Sea). However, at the same time, it is partially claimed by all the surrounding countries (Indonesia, Malaysia, Philippines, Vietnam, Brunei, Taiwan). One third of the international trade passes through this sea. Here is a huge mineral and fishing wealth. Half of the earth's population lives and feeds in this broader neighborhood.

In the days leading up to the US withdrawal from Afghanistan, China tightened the right to "safe passage" of foreign vessels from its territorial sea (or what it considers to be its territorial sea - after claiming a country, Taiwan, islands, islets, and even man-made islets, throughout the South China Sea, "turning it into a Chinese lake"). Extremely accurate information must now be provided to Chinese port authorities by foreign "submarines, nuclear-powered vessels, vessels carrying radioactive materials, oil, liquefied gas, chemicals and other toxic and dangerous substances".

The Australian Navy and Air Force have been patrolling the South China Sea for a century, although the country has neither territorial sea nor EEZ here. They guard free navigation together with the US and the UK. Australia-China relations were strained during the trade war declared by Trump against China in 2018 and which continues today by Biden (a tariffs war mutually detrimental to the benefit of third parties). Obviously, violations of territorial waters and airspace of China will continue even more vigorously now, following the conclusion of the AUKUS political and military agreement (from the initials of Australia, the UK and the US) and Australia's armament with British-built nuclear-powered submarines.

Well: America is Back! Biden's motto. Britain is really Back! Johnson's dream. China has Always been Here! The statement of Xi.

PS.1: Yesterday, in a counterplot, and in the spirit of "One Road Zone" (infrastructure and memoranda agreements, sometimes lion-dragon agreements, with more than 100 countries), China (after months of discussions) applied to join the CPTPP trade agreement (Australia, New Zealand, Japan, Malaysia, Vietnam, Singapore, Brunei, Canada, Chile, Mexico, Peru). (The idea started as TPP initiated by Obama, but as such it failed, after the US under Trump withdrew from it.)

PS.2: The current interdependence of economies is binding for everyone worldwide. China is Australia's most important trading partner in both exports and imports of the latter. China is, after Japan, the second-largest United States debt holder; however It could not redeem it aggressively because it would be like shooting itself at its feet, automatically depleting the true value of its claim.

PS.3: In addition to AUKUS, there are two other active anti-China US international agreements in China’s area: The (since 1946) Five Eyes Agreement (USA, UK, Canada, Australia, New Zealand) on sharing military security intelligence about the Pacific area. The (since 2007) Quad dialogue (USA, Australia, India, Japan) on issues of general and mainly military security interests in the same region.

PS.4: New Zealand, which has had declared itself "denuclearized", reacted immediately to AUKUS through its Prime Minister, Mrs. Arden, saying it would not accept nuclear weapons in its sea.

PS.5: A clash with France, a country affected by AUKUS for reasons of breaking an agreement with Australia for significant submarine orders, but mainly because once again the strongest European military force is not being informed immediately by its allies but by newspapers.