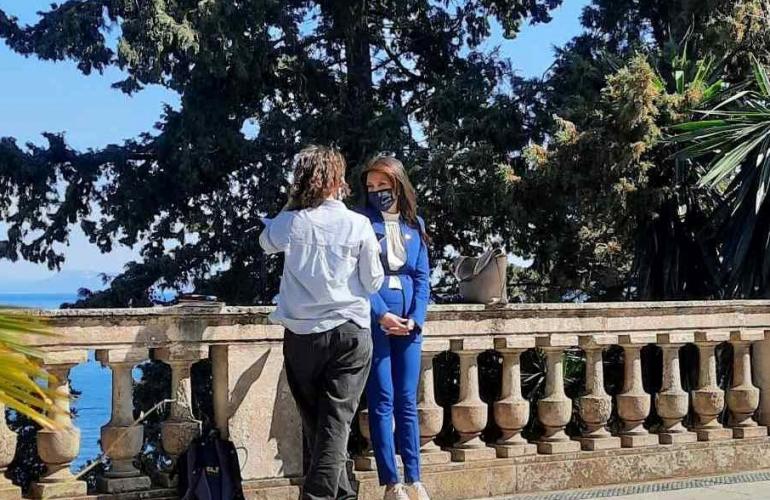 CORFU. The international media are in Corfu to photograph and film Mon Repos Palace and the Church of St. George at the Old Fortress as well as collect and broadcast historical material.

International media, mainly British, and news agencies such as Reuters and Associated Press have been showing an interest in Corfu over the last three days due to the death of Prince Philip. Central Corfu Municipality has been assisting the media crews and also providing information regarding the birth and christening of the Prince, whilst Mayor Meropi Ydraiou gave them a tour of Mon Repos.

Crews from British media such as the BBC and the Daily Mail have come to Corfu along with the news agencies Reuters, based in London, and the Associated Press, the main news agency in the USA, and Deutsche Welle to photograph and film Mon Repos Palace and the Church of St. George at the Old Fortress as well as collect and broadcast historical material. They also spoke to Britons residing in Corfu who were visiting Mon Repos to leave flowers at the entrance.

International media has already been talking about Corfu following the death of the Duke of Edinburgh, including the BBC, the Sun, the Daily Mail, the Independent, Guardian, Daily Telegraph, National Herald, Evening Standard, Daily Mirror, ITV, British Heritage Travel, New York Times, NBC, CNN, ABC News, online news sites such as metro.uk, Inews, 24news.com, greekcitytimes, greekreporter.com and the Vatican News. All of them have been including Corfu as the Prince's birthplace and place of christening.

Central Corfu & Diapontia Islands Mayor Meropi Ydraiou took journalists on a tour of Mon Repos and gave interviews, referring to the fact that the then Mayor of Corfu Alexandros Kokotos was one of his godparents and that the island has always had a close connection with Britain.

Ms. Ydraiou pointed out the excellent relations with the British community on the island and the fact that Corfu is a favourite destination for Britons as well as the heir to the throne Prince Charles. She took the opportunity to let the journalists know that there have been significant improvements to the tourist infrastructure recently and the quality of service to visitors.

In conclusion, she said that she had sent condolences to the British Ambassador for the death of Prince Philip.