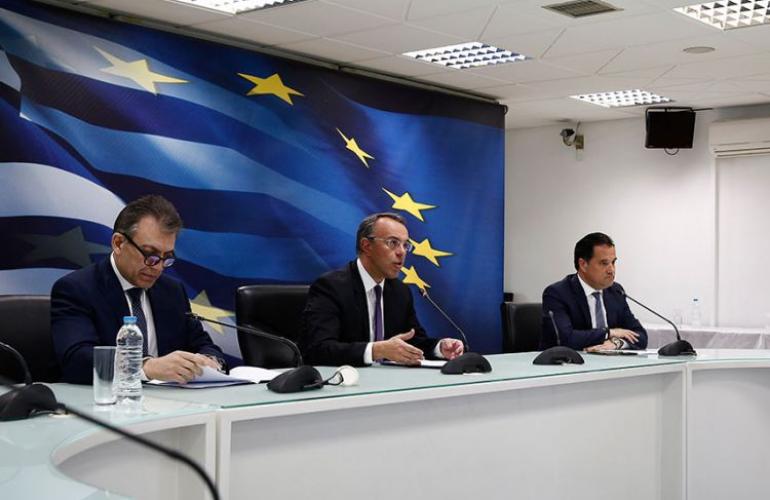 ATHENS. The third package of economic measures was announced by the Ministers for Finance, Development and Employment Christos Staikouras, Adonis Giorgiades and Yiannis Vroutsas.

They said that the full Easter bonus will be paid, with the possibility for some to pay it later, and public doctors and nurses will also receive it. The separate 800 Euro benefit will be non-taxable, cannot be held to pay debts and is non-compensable.

The total package of measures from the national budget and European funds comes to 10 billion Euros and following this a new budget will have to be submitted. "We are obliged by the new situation to take immediate relief measures," said the Minister. "We don't want anyone to be left out."

"We are taking measures to cover all insurance costs and to ensure that all beneficiaries' insurance rights remain unaffected. For 1.4m of our fellow citizens the cost of the extra support for April is over 2 billion Euros," said the Finance Minister.

The 800 Euro benefit will be paid to the following:

- For workers, self-employed and personal businesses who receive the extra €800 debt repayments will be suspended for three months.

- Employees of businesses that have been hit will be eligible, as will the self-employed and traders who have been hit. We are taking measures to cover insurance costs in full. The total cost for 1.4m employees, self-employed and traders in April will be over 2 billion Euros. It is estimated that this will include approximately 440,000 business owners with 1m employees and a monthly turnover of 6.5 billion Euros.

- Those who were laid off or forced to resign between 1 and 17 March will receive 800 Euros. This cannot be held for debt repayments.

- The Easter bonus will be paid in full. It will be possible for employers to pay it at a later date together with holiday pay but the Government discourages this for those who can pay it at the proper time.

- Banks and loan companies have decided to ease existing debt payments not only for businesses but for individuals as well. Employees, self-employed and personal businesses will be able to suspend payments for three months.

- Employees of businesses who have been hit and whose employment contract has been suspended will be eligible for the 800 Euros. This applies to all self-employed and traders.

"Whoever wishes can request better personalised measures compared to the past," said Development Minister Adonis Giorgiades. "Nobody will be left behind and nobody will be bothered by collection agencies."

"Any businesses or employers who are significantly hit will be able to put some or all of their staff on suspended contracts. This measure will apply for one month," said Employment Minister Yiannis Vroutsas. During the period that this measure has been taken it is completely forbidden for businesses to lay off or fire staff. If they do, then it will be deemed  invalid.