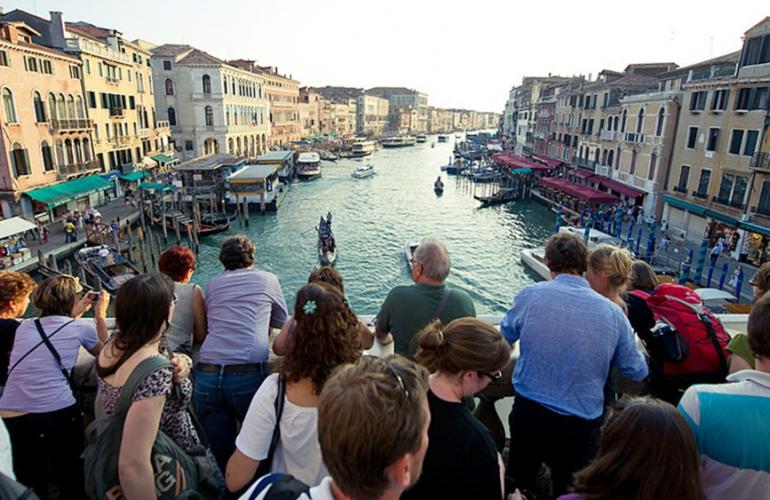 VENICE. The Venetians΄ attempt to secure their own Mayor and Council is being called ΄Venexit΄ in the international press.

Venice is holding its fifth referendum on administrative autonomy from Mestre on the mainland tomorrow Sunday 1 December. The historical city has become a victim of its own beauty - the rise in the level of the lagoon is eroding its foundations, the monstrous cruise ships are threatening its safety and its narrow streets and great squares are overrun by tourists.

Venice has over 30 million visitors annually - 12 months a year - and it is estimated that half of them spend just a day there. These visits, however, don't necessarily bring economic benefit to the city with a large number of tourists even bringing their own food with them. For those in Corfu who haven't visited Venice - just imagine the crowds on the two days of Easter in the Old Town to get an idea of what it is like in Venice every day! This jewel in the world's cultural heritage, this UNESCO Heritage Site which is also part of Corfu's history has become almost unmanageable. The beautiful city is drowning in selfie-sticks and the famous canals and bridges have become just like congested roads and there is a constant rumble from the luggage wheels on the cobbles. It is easy to understand how inhospitable the city has become for its permanent residents and is often a nightmare for visitors as well. The population has dropped from 175,000 after the 2nd World War to 55,000 today. Many residents feel that they have been left to their fate and there are only a few who dare to remain in the historical centre of the Serene Republic to look after their interests.

In an effort to try and bring some balance, the municipal authorities took some measures. One of those was to give priority to public transport - the vaporettos - for locals. Turnstiles were also recently set up in busy areas to try and control pedestrian traffic. "Only a Mayor who is dedicated to this city can save it from overtourism and its negative consequences," say activists.

In order to tackle problem of flooding, which has intensified with the huge cruise ships coming as far as the heart of the city, the Government drew up an ambitious plan - the Moses Plan - with floating sea walls to protect the bay from the powerful waves. 15 years, a financial corruption scandal and 5b Euros later the Moses Plan still hasn't been completed and activists claim that it is just a waste of public money without results.

The recent great floods - the worst in half a century - resulted in four-fifths of Venice being under water and caused hundreds of millions of Euros damage. Residents are still trying to recover and a large number of them are hoping that a solution can come from Sunday's referendum.

The political establishment in Italy disagrees with administrative autonomy for Venice - the Mayor Luigi Brugnaro urged locals not to vote but he was defeated in court. In an effort to temper the protests he created an entrance tax for tourists in order to collect money for local residents. The Municipal Authority also maintains that autonomy will bring an end to relations between mainland Italy and Venice - including the collection of refuse from the waterways.

This is not the first time that Venice has tried to gain administrative autonomy. There have been four referenda since 1970 but they didn't win any of them. Sunday's referendum is the fifth in the last four decades - the last one in 2003 failed because there wasn't the necessary 50% turnout for the vote. Supporters of autonomy are hoping that this time the increased anger about the impact of climate change and mass tourism will be the decisive factor.