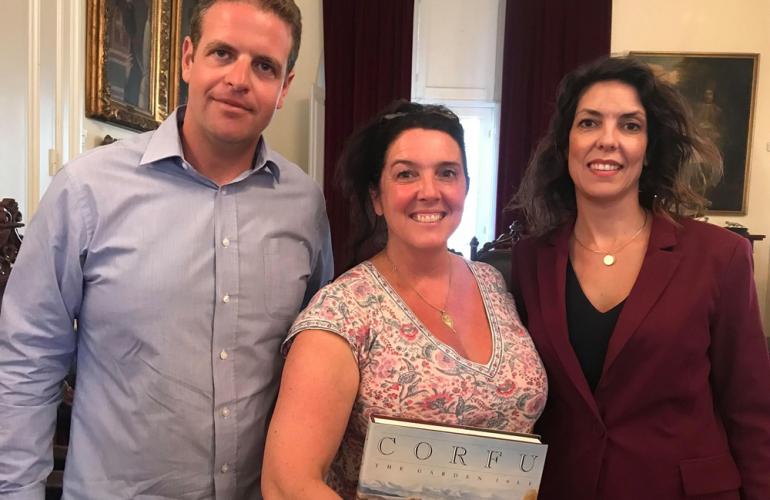 CORFU. The British historian, author and producer Bettany Hughes was filming in Corfu for the documentary "Μediterranean Odyssey".

Mayor Meropi Ydraiou met yesterday with the British historian, author and producer Bettany Hughes, who was in Corfu filming for the British documentary "Μediterranean Odyssey". Bettany Hughes is well-known for her books on Ancient Greek subjects and historical documentaries which she writes and presents on the History Channel, BBC and Channel 4.

The discussion focussed on developing ways to attract television, advertising and cinema companies to Corfu. The Mayor told Ms. Hughes about the Municipality's new planning strategy for tourism which includes the establishment of a Film Office based in Corfu.

She said that this proposal is at a preliminary stage and is expected to be realised in collaboration with other organisations as part of a new Destination Management Organisation and a tourist promotion campaign.

Deputy Mayor for Tourism Panayiotis Varouchas also took part in the working meeting and talked about the many benefits of cinema tourism, citing the positive image of Corfu created by the TV series "The Durrels", a large part of which was filmed on the island.

He also told Ms. Hughes of the increased interest from British production companies in Corfu and the Municipality's decision to establish an office to provide logistical and advisory support. This office has already been set up in San Giacomo Old Town Hall.

Bettany Hughes said that she had been delighted by the island's natural beauty and the architecture in the old town and that as a destination it had all the elements that could attract interest from production companies.