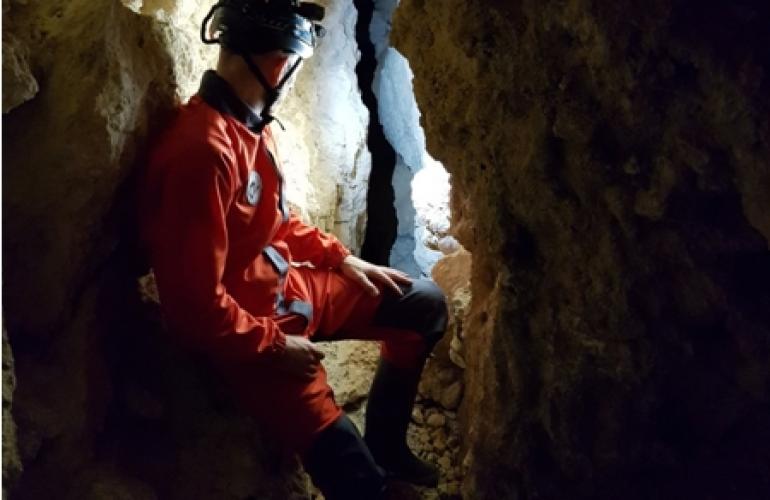 Together with many Corfiots, he visited 25 caves in 15 days. This is a review of the research into Corfu caves that took place from April 16 to May 1. Speleologist René van Vliet climbing out of the Platesgourna cave

"This caving expedition required much preparation. Over the last eight months I have studied various old Greek books and a scientific article from a previous caving expedition dating back to 1957. Upon request, I received several old maps and their captions from the Corfu Archives. The 18th century maps contain markings of caves and often a name of a cave. Together with the environmentalist Giannis Gasteratos and Theodoros Skalitis, we have tried to place these maps in today's topographic situation.
The most important part of the research was the conversations with the villagers. The older generation in particular knows many caves since their childhood, the names of the caves and their stories. Social media such as Facebook gave me the opportunity to get in touch with them. The speleologist and caver in front of the entrance of the ‘varathro’(chasm)  in the Grava tou Charou (Death) cave.

A good physical condition is important for a speleologist. That's why I train 5 days a week. Together with the Dutch speleologist Gertjan van Pelt we trained for the situations and problems that can occur in a cave. A small human error can lead to a major accident!
Sponsorship is very important for cave research. The Dutch company CanyonZone, the Spanish company Rodcle and the French company Aventure Verticale wanted to support this caving expedition by providing caving materials. I am very grateful to them for their support. I hope that more companies such as travel agencies, hotels and car rental companies would like to fund the next caving expedition that will take place in the summer of 2019.” Speleologist and caver René van Vliet examined the decoration also in the lowest parts of the Platesgourna cave.

Regarding his experiences during this caving expedition he added: "Corfu has more caves than you would expect. Up to now I have gathered information from 186 caves and chasms (‘varathra’), but there are many more on land and sea! During the caving expedition I was able to visit 25 caves. 77 caves are still under consideration. Normally, I only have positive experiences in Corfu, but this year I also had a disappointing experience in a village with the organization of the cleaning of the paths.

Mrs. Rosa Theresia told me an impressive story from the past. In November 1940 the Italian Air Force began bombing. Some days later, on November 4, 1940, Rosa was born in the Grava Lemonia cave in Sokraki.  Later two sisters were also born in this cave. The cave was named ‘Birth cave’.

I have good memories of the adventures in Loutses. There, along with Yiannis Kormaris I visited some caves, such as the Tristomo chasm, Mikri Grava cave and the Anaraidoklisia cave. The Anaraidoklisia cave, also called Neroidoklisia or Fairy-church cave, is located on the top of the rocky mountain opposite Megali Grava cave. The name of the cave refers to a phenomenon that causes air siphons, pulling light objects into the cave. This is why the residents sometimes see papers, twigs and feathers around the hole. Sometimes the air rises, depending on the weather.
In Spartilas I visited several caves such as the Gravolithia cave. This large and deep cave has fantastic formations of stalactites. In many cases, and because of its low height, stalactites and stalagmites have joined together and have formed pillars. In 1926 they believed that the cave was the nest of two dragons. One dragon had been killed by a Venetian soldier a few centuries ago, but the other was still in the cave, and sometimes he went out to devour a sheep or a goat. In 1926 thousands of bats were found in the cave. In the last two years, I have not seen one, just a lot of bat guano. Speleologist and caver René van Vliet crawling in the lowest parts of the Gravolithia cave.

During this caving expedition I visited some caves with rooms filled with stalagmites and stalagmites thousands of years old. The stalactites and the stalagmites grow incredibly slowly - about half a centimetre in 100 years.
One of the most amazing caves in Corfu is called the Platesgourna cave. The cave is hidden in an olive grove. The cave has two small entrances, but only one is suitable for access. After the entrance follows the main room of the cave with impressive decorations. The Platesgourna cave has many enchanting stalactites, different groups of amazing stalagmites and beautiful columns. Some stalagmites are several metres tall! The cave is clean and totally untouched and the cave is extremely vulnerable due to its unique interior.

Together with Giannis Gasteratos, we visited some caves in central Corfu, such as the Grava stu Pitiri cave, the Grava tou Charou (Death) cave and the Grava stu Bouzavieri cave in Agii Deka. The Grava stu Buzavieri cave has a main hall with impressive decorations. Some parts of the walls have yellow crystals, almost like dust. At the end of the main room there is an extraordinary but dangerous chasm. The walls of the chasm are dry and have stones that break off easily. The descent is difficult but the ascent is even harder! The chasm leads to the right under the floor of the cave. There is a passage leading to the left hand side of the chasm at the end of which there are two large spaces: a tall space above the passage (the first floor) and a huge, deep space below the floor level of the passage.

The speleologist and caver examined the decoration of the Grava stu Buzavieri cave and descended into the chasm.

Together with Andreas Korikis, Kostas Andriotis and Christos Kapodistrias we tried to solve the mystery of the Tripa tou Pelaou (Hole of the sea) cave in Agios Mattheos. It is said that the cave has seven levels and communicates with the sea. There are some stories about the cave. One of these is that in the past a cat was thrown into the cave and the next day he swam in the sea. During the descent we had to overtake some sharp rocks and to protect the rope from them. On the floor of the first cave level there are exceptional decorations such as different types of stalactites and large stalagmites. After the main room follows a second level. The passage is quite narrow and has a depth of 9 metres. There follows a third level. This passage is also quite narrow and has a depth of 3 metres. The floor of the third floor is covered with soil. On the next visit we will try to remove the soil from the third level to see if there is a fourth level or even more."

About his future plans and the next caving expedition in Corfu speleologist and caver René van Vliet added: "I want to go back as soon as possible and to continue with the research. Many hidden and interesting caves are waiting for a visit! For the search of many caves I need the help of volunteers and professionals due to dense vegetation. With a lot of help, many caves will get accessible to all of us!”
René van Vliet would like to thank all those who helped him. "I was able to visit the cave thanks to the kind help of: Giannis Gasteratos, Theodoros Skalitis, the Archives of Corfu, Rosa Theresia, Angeliki Sgourou, Nikos Gisdakis, Periklis Servos, Antonios Servos, Anna Michalas, Giannis Kormaris , Litsa Karagianni, Filippos Parginos, Vassilis Mavronas, Maria Nikolouzou, Spiros Rizos, Georgios Soukeras, Maria Thomas Taverne, Andreas Korikis, Kostas Andriotis, Christos Kapodistrias, Takis Tsiliannopoulos, Evgenios Lomis, Michelle Anthis, Theodoros Nikomanis, Aristidis Tsirimiangos, Voula Bouka,  Ioannis Loukas, Xenia Tsenembi, Gertjan van Pelt, CanyonZone, Rodcle, Aventure Verticale and many others."
The results of the research, including photos, videos and information, will be published on www.speleocorfu.com.
Also whoever has information about the caves in Corfu or would like to fund the cave research can send a message on Facebook: VlietVanRene or email: [email protected].