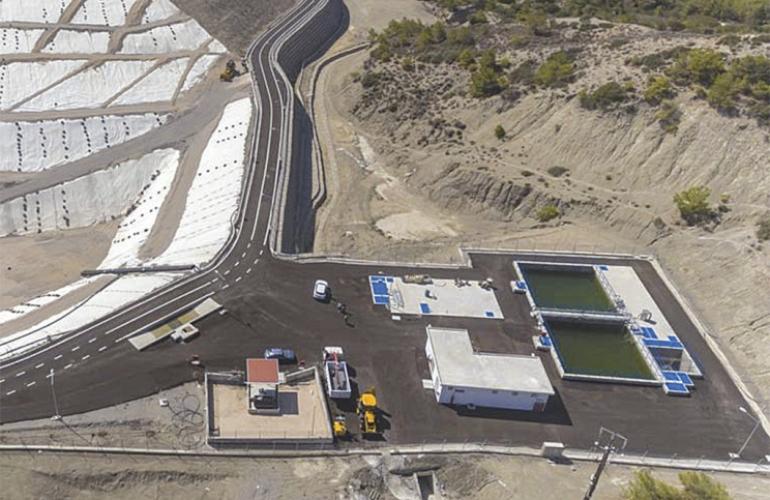 The photo of the waste management facilities in Rhodes is misleading and quite provocative. Archive photo

ATHENS. Minister Panos Skourletis gave a comprehensive answer to a question from MP Emmanuel Konsolas (New Democracy). Below is the Minister’s response to the question from Mr. Konsolas on the subject of ‘Immediate measures and changes to the official legislation in order to tackle the explosive refuse situation in Corfu - which is a danger to public health and is damaging the island’s image as a tourist resort’.

In Corfu, as in other regions of the country, the problem with the siting of new waste management facilities was, is and will be extremely difficult as local residents are opposed to the siting of waste management facilities in their area. This is not only the case in Greece but is true worldwide and is known as the NIMBY syndrome. In our country the National Plan for Waste Management (ESDA) was drawn up in 2015 to tackle an issue that had been outstanding for many years – the necessary and imperative review of the national plan in order to take on board the continuous developments in European Union laws raising the target levels as regards recycling and accelerating progress towards a cyclical economy.

At the same time we had to take into account the ongoing developments in the systems and technologies for waste management. In 2016 the Regional Plan for Waste Management (PESDA) was completed (some small items were completed in the first half of 2017) as part of the National Plan for Waste Management (ESDA). PESDA was drawn up by the regional waste management organizations and the regional administrations and was approved by the Regional Councils. Its legality was then checked by the Decentralised Administration and ratified by the Ministry for the Environment and Energy along with the Ministry for the Interior.

The Regional Plan for Waste Management (PESDA) for the Ionian Islands and Corfu provides for the following:

2. Completion of facilities and operation of South Corfu landfill as a residue landfill.

3. Development of a system for sorted at source bio-waste and recyclable materials (4 streams).

4. Construction of a Central Waste Processing Unit with composting unit in Central Corfu.

5. Establishment of composting unit in Paxos.

8. Construction of Centre for Recycling, Education and Sorting at Source (KAEDISP).

9. Establishment of 3 mobile Waste Transfer Stations (SMA) in Corfu (north, south and north-west) and 3 small SMAs in the Diapontia Islands.

10. Upgrading and renovation of the existing Central Corfu landfill facility.

Corfu Solid Waste Management Association (SYDISA) and the municipality had and have the complete funding support of the responsible Ministries, as do all the municipalities in the country, for the implementation of the works outlined in PESDA. The precondition for all the regions was and is that they submit complete proposals for the studies and licensing of the facilities in order that they can be included in ESPA funding.

Up to date, the Municipality of Corfu has applied the following:

- ‘Development of a separate network for the collection of recyclable materials’ – proposed public expenditure: 1,238,760 Euros

- ‘Development of a separate network for the collection of bio-waste’ – proposed public expenditure: 925,476 Euros

2. PEP 1932/11.2016 ‘Projects to disseminate information about and raise awareness of Integrated Solid Waste Management in the Ionian Islands’

5. 2242/ ‘Support for those eligible for Urban Waste Management projects’

A short history and the interim period

Temploni and South Corfu landfills existed prior to PESDA. From 2010 onwards, however, there were continuous problems with the Temploni landfill as regards environmental regulations and its proper operation which led to the first EU Court verdict in April 2017 demanding the cessation of operations and its renovation (it was oversaturated).

SYDISA, as part of PESDA, started legally implementing the aforementioned interim period in October 2017 with the mobile Mixed Waste Processing Unit and baler on the periphery of the landfill plus temporary storage.

From the operation of this unit come the recyclable materials, which go for recycling, the compost, which is a valuable resource for the renovation of the landfill, and the residue bales to be taken to the South Corfu landfill which, according to PESDA, will be converted into a residue landfill. This interim arrangement is sufficient until the Central Waste Management Unit is constructed in Central Corfu as well as the new residue landfill as provided for in PESDA.

SYDISA completed the necessary studies and received environmental approval to convert the South Corfu landfill into a residue landfill. All that remained was for the Ionian Islands Regional Administration to issue the licence. This was delayed due to the residents of South Corfu obstructing the connection of power and water supplies as well as the completion of a small part of the access road.

The period of interim management began to be implemented gradually in October 2017 but the bales were being stored without the possibility of their being transported to the South Corfu landfill for the reasons mentioned above. At the end of March and beginning of April 2018 the contractor in charge of the mobile Mixed Waste Processing Unit and baler gradually stopped operating the interim facility resulting in a problem with refuse collection.

The responsible Ministries continuously did what they could to get the interim facility operating again and the remaining works completed at the South Corfu landfill so that it could be licensed in order that refuse collection could get back to normal in Corfu and Paxos.

On 6th May fire broke out in the South Corfu landfill causing damage to the administrative building and electricity panels as well as, to a lesser extent, the water supply network. Prior to that SYDISA and Corfu Municipality had attempted unsuccessfully to complete the remaining work in order that the landfill could receive an operating licence from the Regional Administration.

On 22nd May Corfu Municipality submitted a request to the Decentralised Administration for Peloponnese, Western Greece and the Ionian Islands and on 6th June an amendment was issued to allow the legal transportation of bales from Temploni to the South Corfu landfill and their storage therein. This amendment applies to the bales that have collected over time at Temploni and to the bales that will be produced following the resumption of the interim management system.

On 2nd June refuse collection began again and the waste was taken to the interim management facility where, until 13th June, approximately 2,100 tons of waste was processed. On 15th June a contract was signed by SYDISA and the contractor who would transport the residue bales from Temploni to the South Corfu landfill and the transfer to and depositing of bales at the South Corfu landfill commenced.

A contract was also signed with the company which would take on the interim management of the mobile Mixed Waste Processing Unit and waste baling. Tenders have been invited for the work of repairing the damage from the fire at the South Corfu landfill as well as for the study in order to receive funds for the construction of the permanent Waste Processing Unit and the new Residue Landfill.

Shipping the waste off the island is unacceptable

In conclusion, we would like to stress the fact that nobody can ignore the existence of this public health ‘bomb’ in Corfu, news of which has spread worldwide, undermining not only the island’s economy but also Greece’s image. The government doesn’t intend to stand idly by. It is determined to carry out the plan which, as part of PESDA, was approved by all the local authorities – including Corfu.

However, the time for discussion has passed and the PESDA plan needs to be implemented. As mentioned above, this calls for the interim use of Lefkimmi as a residual landfill, not a landfill. The government considers other proposals unacceptable, such as those which call for the transportation of waste to Kozani. This is not only unecological but would also be serving the interests of those who, by requesting funds from the government for the transportation will be profiteering at the expense of the public.