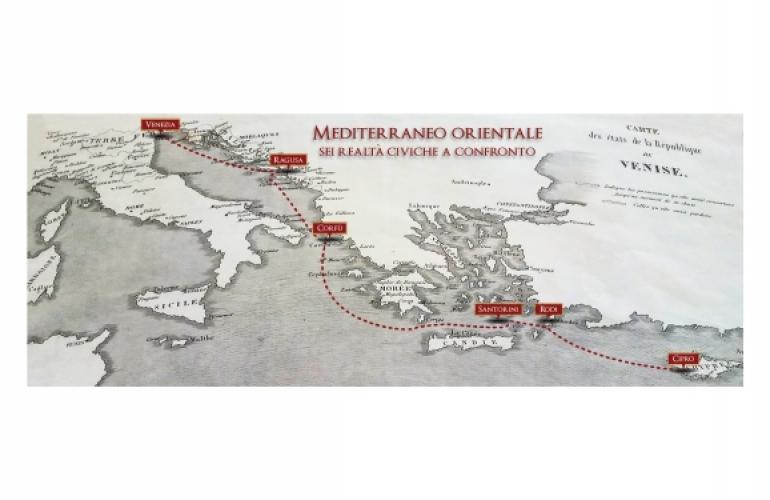 From Corfu the San Giacomo Cultural Society took part in the meeting (see Enimerosi article from 15/4 here), and made the following announcement:

“An important initiative from ‘San Giacomo’ Cultural Society”
A first meeting took place in Venice to set up a network with residents’ organizations from towns and locations that are included in list of UNESCO Cultural Heritage Monuments.

On Friday 12th April representatives from residents’ organizations in Venice, Corfu, Rhodes, Dubrovnik, Paphos and Santorini met in Aula Magnato at the Ateneo Veneto – Venice’s historical institute of science, literature and arts.
The purpose of the meeting was to meet each other and exchange views on the establishment of common positions for the foundation of a structured collaboration within an organizational network. This will focus on historical towns and their culture as there is growing concern for their present and future as regards sustainable development.

The President of AteneoVeneto, Mr. Scarante - former Italian Ambassador in Greece - gave the opening address at the main session.

The Friday meeting highlighted our common concerns and the need to find common goals and actions amongst citizens, first of which was judged to be the establishment of citizens as an organized stakeholder in discussions with international and European bodies as well as state and local authorities.

Our delegation, in common with those from Rhodes and Paphos, focused on the need to tackle today’s unsustainable development, whereas – as was to be expected – the delegations from Venice, mainly, and Dubrovnik focused on the phenomenon of overtourism, which is indeed causing social disintegration and making the living conditions of the towns’ residents almost unbearable.
The San Giacomo President Alekos Makris said that a prerequisite for change is the rekindling of citizens’ ownership, as what is needed today is not a new political model but a new active citizen model.

We will shortly publish the text of our presentation at the meeting in the hope that it can act as a catalyst for greater participation from fellow citizens in the Society’s initiative.

Aware of our responsibilities and confident about the future of our local communities, we met today in the Florian Café for internal discussions in the morning session, and at the Ateneo Veneto of Venice for an open session which was attended by more than 100 people. Our talks resulted in the following Venice Declaration.

to promote sustainable tourism based on mutual respect, the protection of the environment, the preservation of our cultural and natural heritage. To achieve these objectives,

We will stand together in

raising awareness, networking, developing and exchanging good practices, advocating for better policies aimed at ensuring quality of life for both our local communities and visitors alike, and in promoting this network for sustainable islands and coastal towns, which remains open to new members.

Today in Venice we agreed

to hold the next meeting on 12 and 13 October in Kerkyra – Corfu, and to welcome the new members from Crete.