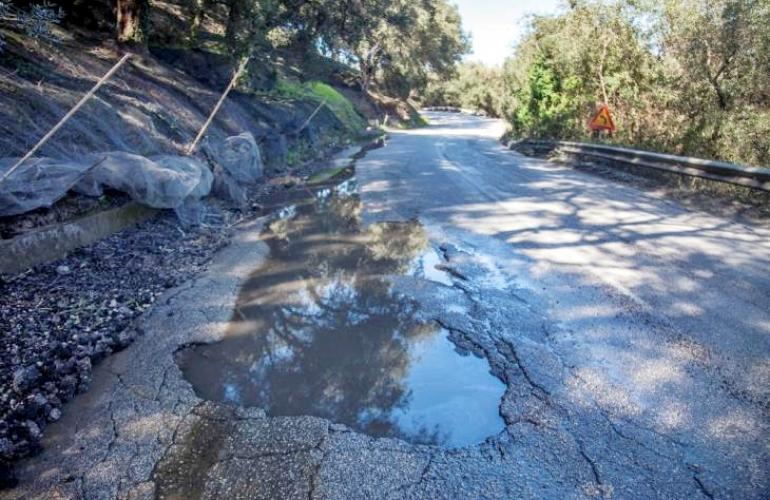 Complete restoration work on Corfu’s ruined road network seems to be heading for an indefinite postponement.

The Minister for Infrastructure, Christos Spirtzis, found the amount of extra funding that the local authorities requested for the maintenance and restoration of Corfu’s ruined road network to be exceptionally high. The state of the island’s road network - which has suffered from the weather, the large number of tourist buses and inadequate maintenance – has caused a social outcry which cannot be ignored.

As had been announced on 25th March, when Christos Spirtzis was in Corfu, a meeting was held on Holy Tuesday at the Ministry of Infrastructure attended by the two Corfu MPs, Fotini Vaki and Kostas Pavlidis, Ionian Islands Regional Governor, Theodoros Galiatsatos and Corfu Mayor, Kostas Nikolouzos. Mr Pavlidis told Enimerosi: “Two files were given to the Minister outlining the condition of the road networks – one from the Regional Administration and one from Corfu. The files contained photos and information describing the tragic situation. The Region requested 19m Euros and Corfu Municipality requested 12m Euros.

The Minister said that the 30m requested for full-scale restoration cannot be made available immediately, nor can the project be integrated elsewhere. He went on to say that the work could be planned over a three-year period.”

According to Mr. Pavlidis, “Emergency funds will be approved immediately, perhaps by the end of 2018, for work that is absolutely necessary where there has been serious damage – subsidence, landslides etc. The Ministry stressed that it would pass on the files to the Ministry of Finance and Development so that funding could be found for the complete restoration of the road network.”